The outer surface of the earth is in constant motion due to plate tectonics. In the vicinity of Washington State, relative plate motion between Juan DeFuca and North America crustal plates occurs within a transitional region of the Cascadia subduction zone during an Episodic Tremor and Slip event (ETS). This transition delineates an area between the upper-locked and lower "freely" slipping interface of the heavier subducting oceanic lithosphere underneath the lighter continental crust of North America. Like any ordinary earthquake, an ETS has a measure of energy released during the event. This is calculated as moment magnitude (Mw). Cascadia ETS events average 6.7Mw (almost equivalent to the 2001 6.8Mw Nisqually Earthquake). This would represent around 2-3cm of slip across the plates at depth. Click here for a discussion on ETS. 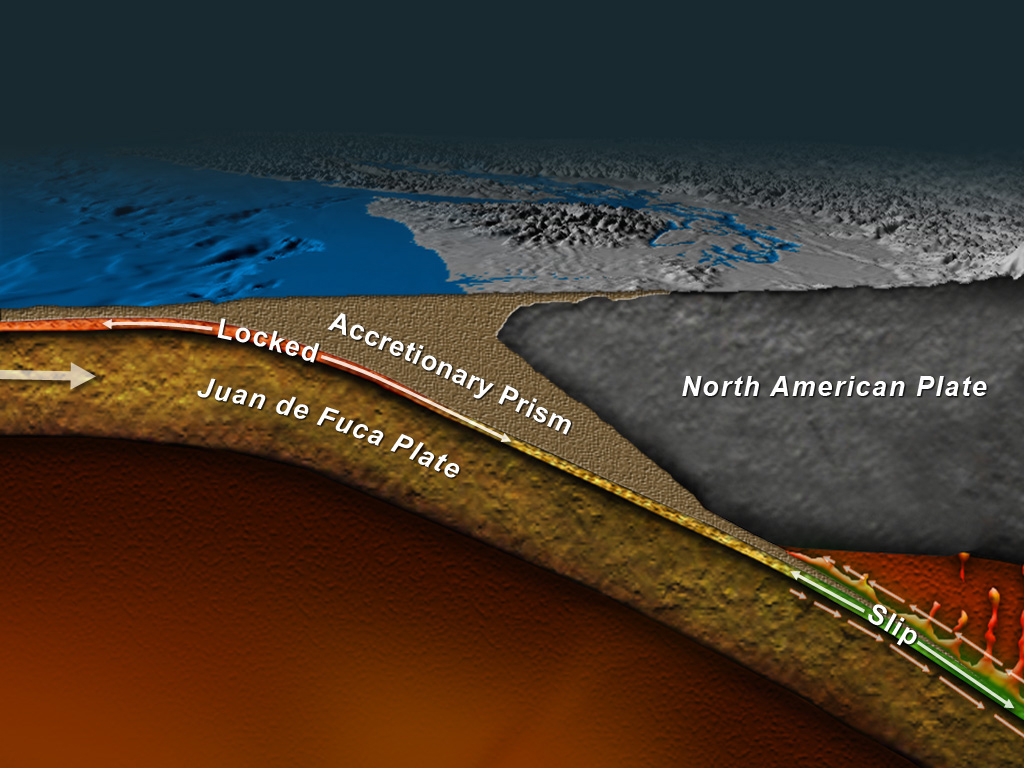 
The transition starts offshore near 10 km depth, with 100% "locked"-coupling dropping smoothly to half by 25 km depth. However, unlike previous models, the lower limit of the effective transition zone here is constrained by repeated ETS events to be near 25 km depth. To fit the interseismic GPS data while matching the estimate of moment release by ETS, plate coupling must drop abruptly from 50% up-dip of the 25 km depth to less than 15% within the ETS zone, before trending smoothly to 0 (i.e., "freely sliding") by 70 km depth.

The new constraint provided by ETS thus requires a faster rate of moment accumulation in the upper-locked zone than that inferred in previous models. Modelled deformation cannot fit the ~2 dozen GPS data vectors that delineate the overall movement of North America between earthquakes throughout Puget Sound without this rapid drop in seismogenic coupling at 25 km.

Over the 11-year period of observation, only a small fraction of convergence-related stress accumulation, estimated at 15%, remains below 25 km depth to drive future coseismic rupture (plate movement during an earthquake). Up-dip of 25 km, by contrast, future coseismic slip accumulates at a rate of approximately 1.8 cm/year accounting for half of Juan de Fuca- North American convergence rate. Shown here to the left are 9 years of GPS data from the Cascadia Subduction Zone along the convergent margin from northern California to southwest B.C., Canada. ETS events well recorded are delineated with blue lines. Most events last 3 to 4 week with amplitudes between 2 and 7mm on the surface (Szeliga et al. 2008). Note the slow coherent drift of the daily positions between the blue lines. This measured motion reflects interseismic crustal strain accumulation between earthquakes discussed above. Distinct model constraints of the locking-to-sliding areas of the subducting plate can be made when this interseismic strain is combined with the offsets recorded during ETS (shaded blue lines).

A suite of 15 Episodic Tremor and Slip events imaged between 1997 and 2008 along the northern Cascadia subduction zone suggests future coseismic rupture will extend to 25 km depth, or ~60 km inland of the Pacific coast, rather than stopping offshore at 15 km depth. The ETS-derived coupling profile accurately predicts GPS-measured interseismic deformation of the overlying North American plate, as measured by ~50 continuous GPS stations across western Washington State.

When extrapolated over the 550-year average recurrence interval of Cascadia megathrust events, the coupling model also replicates the pattern and amplitude of coseismic coastal subsidence inferred from previous megathrust earthquakes here. For only the Washington State segment of the Cascadia margin, this translates into an Mw=8.9 earthquake, with significant moment release close to metropolitan regions.

The Juan de Fuca-North American plate coupling model discussed here is broadly consistent with previous models based on nearly a century of levelling and trilateration measurements. The rupture and attendant ground deformation for the ETS-delineated interplate coupling derived above can be compared to paleoseismic constraints on coseismic deformation from previous great Cascadia megathrust earthquakes. When extended over the 550-yr recurrence interval for great events here, this coupling profile predicts both widespread elastic subsidence and uplift along the coast. The predicted pattern tracks both the amplitudes and spatial distribution of available paleoseismic inferences of vertical ground motion along the Cascadia coast during previous events.


The Washington coastal regions south of 47deg, and all of coastal Oregon and British Columbia are predicted by this coupling model to subside on the order of half to an entire meter, in coarse agreement with the approximate 1 meter of subsidence recovered from drowned forests, buried peat layers and tsunami sand horizons from the 1700 AD and previous events. Coseismic uplift, by contrast, is predicted along the northwestern coast of Washington State, a region in which no paleoseismic subsidence has been identified. This would suggest the coupling model derived from recent GPS measurements discussed here is reasonably representative of the long-term average characteristics of strain accumulation over the complete interseismic period.

The most important aspect for northern Cascadia is that stronger coupling between 15 and 25 km implies greater coseismic slip near major population centers, and provides an estimate of future coseismic slip along this region. 50% coupling suggests 9 meters of slip should be expected directly up-dip of 25 km. This lies well inland of the coast, directly west of the greater Seattle-Tacoma metropolitan basin. For the 300 km-long Washington State segment of Cascadia constrained by this study, this constitutes an Mw=8.9 earthquake.

Episodic creep and non-volcanic tremor are increasingly observed in many subduction and transform settings world-wide, and together comprise a common mechanism by which faults accommodate adjacent locked and freely-slipping regions. As hypocentral locations improve, along with estimates of the moment release rate of seismic tremor ETS constitutes a potentially valuable new tool for mapping the future rupture depth, resultant magnitudes, and attendant seismic hazards of future earthquakes on many known faults.